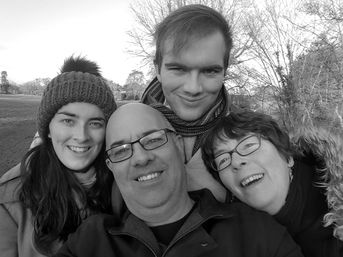 ​Oliver (Olly) grew up in Zimbabwe where his grandfather was a Methodist missionary. He attended a boarding secondary school where he says that he neglected his studies in favour of playing sport. At the age of 18 he set off on a round the world trip in a gap year, where the first stop was Northern Ireland. He was invited to go to Strandtown Baptist Church and, having been in a church environment all his life, readily accepted. Under the teaching there God opened his heart and he accepted Christ as his savoir. During this time, he met Valerie and the two became friends and eventually started dating.
Olly abandoned the rest of his trip and elected to remain in Northern Ireland where he married Valerie in 1994. They now have two grown up children, Keren  and Haydn.  He sold cars for over 20 years, but they both always felt the call to serve God, especially in the Pastorate, but the doors never seemed to open. In 2015 he left work and started a Theology Degree in the Irish Baptist College and Valerie also enrolled in the ladies course part time. During his last year in the college he was invited to preach at Richill Park Baptist and in April 2018 the church voted to call him as their Pastor.
​Olly was inducted in June 2018

If you would like to speak to Olly about any spiritual or pastoral matter, please use the "​contact us" page